Things to do in Arugam bay

What is Arugam Bay?

Arugam Bay is a beautiful crescent-shaped Bay on the Indian Ocean in the dry zone of Sri Lanka's southeast coast.

The bay is located 320 km due east of Colombo. "Ullai" as Arugam Bay is locally known is a popular surfing and tourist destination. Beyond surfing there are many things can be enjoyable, Lagoon tour, bird watching, elephant watching, Kumana National Park, Kudumpigala monarchy and many ancient ruins & archaeological sites. After the war ended, there are lot of tourist not only surfers but many nature lovers visiting.

- We will contact you back with the vehicle available details for the date and time you request.

Arugam Bay a very popular surfing center ranked 3rd among the best 20 beaches of the world by the British Surfers Association. 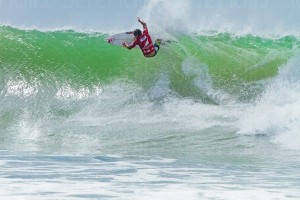 The British Professional Surf Association held their ‘Champion of champions’ tour competition at Arugam Bay in 2004. It was a huge success with Mother Nature providing world class waves, and surfing in Arugam Bay getting funding for 5 years at a stretch.
In mid-2010 ASP (Association of Surfing Professionals) hosted its first international surf contest in the Bay. The winner of such was Australian Julian Wilson. ASP repeated their contest tour in 2011 added a women's competition to the men's long board championship at Arugam Bay.

A SLOW AND TRANQUIL JOURNEY THROUGH THE MANGROVES OF POTTUVIL LAGOON 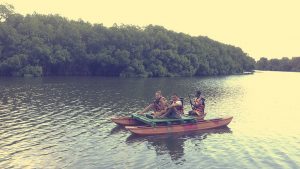 The mangroves, islands and waterways of Pottuvil Lagoon are a rich ecosystem teeming with giant monitor lizards, crocodiles, kingfishers, the occasional elephant (who does not like to be disturbed), eagles, peacocks, egrets and monkeys.

Birdlife includes spoonbills, stilts, several kinds of kingfisher, sea eagles, pelicans and herons. Seeing them as you cruise along on a two-hour mangrove ecotour , with only the sounds of the fisherman’s pole in the water and animals in the trees, is both exciting and serene.

Migrant Birds visit the area around Arugam Bay Twice a year. And that always happens in the so-called "Off-Season" 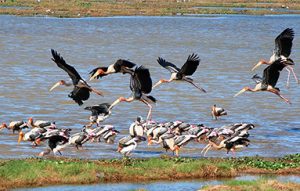 Anyhow, Kumana National Park covers an area of about 18,149 hectare of land. It is located in the south-east part of Sri Lanka. This bird sanctuary is an attraction for bird watchers.

This national park was previously known as the Yala East National Park and it came to be known by its present name from September 5, 2006. The park was reopened in March 2003 after it was closed since 1985 due to Civil War in Sri Lanka.

There is a swamp lake of about 200 hectare known as Kumana Villu in Kumana National Park. During the months of May and June numerous species of water birds nest around the swampy area.

Beach : Okanda, 28 km south of Arguam Bay is a popular surfing spot. We may see elephants in the road. 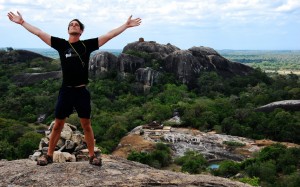 Heritage Conservation Zone of LHT :
OOkanda-Kudumbigala region is the first Heritage Conservation Zone of LHT.
The Okanda-Kudumbigala Heritage Reserve is a Sanctuary, a Sacred Grove, where traditional laws shall take precedence over modern laws. Sacred groves are operated under the patronage and guidance of the villagers themselves as the custodians of the living tradition.

The Legends :
At Okanda, beside a rocky outcrop there is a shrine dedicated to the God of Kataragama, Skanda. Okanda hilltop has by tradition been declared to be one of the places where a divine ray (katir) from God Skanda struck.

The Batticaloa Manmiam narrates the story of how God Skanda landed here with his consort Valli, with a view to kill the demon Asura. The God, being a god, & and a fine one being at it, as expected vanquished the goddamn demon by splitting the Vahura hill into two.

Three splintering rays which originated thence from the ocean, were sheltered, one on the Okanda hilltop, one on a white naval tree at Tirukkovil and the third on a tillai tree at 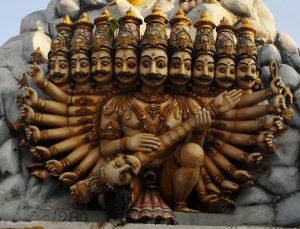 Mandur.
God Skanda's consort is venerated at the Valli Amman kovil at the top of the rock.

King Ravana, ten-headed Lord of pre-historic Lanka in Hindu epic Ramayana, was believed to have rested here on his way to Koneswaram.

And more you may enjoy in Okanda such as The aborigines, The multicultural nature, Hindu Shrine and Pada Yatra pilgrimage

A walk to Elephant Rock, about 3km south of Arugam Bay provides an appr 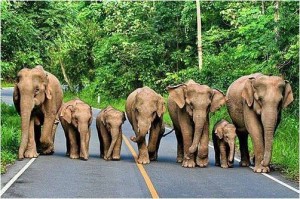 eciation of the extent of the beautiful beaches.

In the early morning or evening we will have the sight of elephants roaming nearby. Also we can Catch the rare spectacle of elephants strolling across the A4 through the Lahugala elephant corridor.

Hulannuge is one of the five villages in Panam Pattuwa.

Karandahela is a 633 foot hill situated in Hulannuge with the Karandahela tank situated on the south close to the base of the hill. 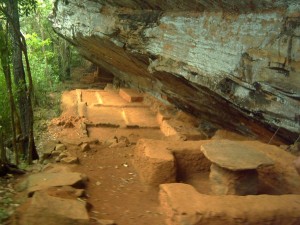 Hulannuga: Caves
The caves on top of the hill and on slopes are amazing creations of nature.
There are numerous caves here with and without drip ledges. Among them the most amazing is the cave in the second circle, perhaps the largest cave in Sri Lanka.

The Buddha statue is considerably damaged by treasure hunters.

At the water's edge of this Karandewewa tank is an ancient dagoba. Next to the cultivated land below the tank is the village. Herein too, as in all over the island, once again, the ancient concept of the triple focal points of the village, tank, temple & dagoba has come into prominence.

Also you will be amazed by Tharulengala Aranya Senasanaya Buddhist Forest Hermitage and Ruins of Stupas in hulannuga.

However it is not possible travel directly from one to the other.

Two parks are separated by the River Kumbukkan Oya. 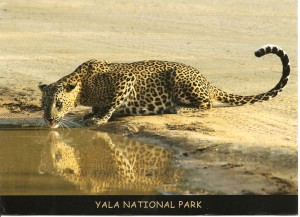 Yala East is entered at Okanda, about 30km down the coast track south of Arugam Bay via the small town of Panama. The fauna is similar to that of Yala West: elephants & leopards. The park supports an elephant population, though herds are smaller than its rich neighbors, Gal Oya National Park to the north & Ruhuna Yala National Park to the south.